Reading in the Car with Motion Sickness

Growing up, I was a child who had to sit in the front seat of the car on long car rides due to motion sickness.  I've out grown that, but I am unable to read anything while traveling in a vehicle as a passenger.  As a librarian, I've heard of children who are able to read in the car while it is in motion.  But what about the kiddos in your life who are not reading on their own yet or who get motion sickness while traveling?  I do get a lot of families coming in asking for audiobooks to listen to in the car during long car rides (which I highly recommend!)

But what about the time you have to sit and wait while the car is parked.  How do you keep your youngest entertained while waiting for an older sibling to get done with soccer practice?  Well, I just came across this article from The Children's Book Review website tackling that very topic.  The article offered three suggestions for perfect opportunities when to pass out print books to your kiddos while waiting in the car when it is not in motion:
And don't forget, if you ever need any reading or audiobook recommendations, please stop by the children's desk.  We are always more than happy to assist you in finding just the right book!
Posted by Janet, Youth Services Librarian at 10:59 AM No comments:

The Banned Book Week Coalition is a national alliance of diverse organizations joined by a commitment to increase awareness of the annual celebration of the freedom to read.  This Coalition seeks to engage communities and inspire participation in Banned Books Week through education, advocacy, and the creation of programming about book censorship.  Hundreds of books are removed or challenged in schools and libraries across the U.S. each year.  The American Library Association estimates that 70-80% of challenges are never reported.  Join the library this week as we celebrate our 1st Amendment Rights by checking out a book from one of our Banned Books Week displays, located in the Children's Room, the Young Adult Room, and adult titles located near the Adult Reference Desk.  To discover books that have been banned across the country, check out this list of Frequently Challenged Books from the American Library Association.


Posted by Janet, Youth Services Librarian at 3:55 PM No comments:

WCCLS is proud to announce it's latest online subscription acquisition: Lynda.com!  lynda.com is an award-winning online learning site with over 4,000 video courses in business, creative arts, and technology for your personal and professional growth.  Here you can learn from recognized industry experts.  Plus, the courses are for all skill levels.  You can learn at your own pace and earn certificates too!


Once you create your FREE account with your own login and password, you can begin to access the online video courses.  To learn more about Lynda.com and how to create your own profile, check out this FAQ Sheet from WCCLS.

Posted by Janet, Youth Services Librarian at 12:24 PM No comments:

Sometime in the maybe-not-so-faraway future, a robot named Fuzzy is starting school. Of course, just because he is the first robot student doesn't mean he's the first robot in the school. Duct cleaners, garbage emptiers, even the vice principal are all robots! In fact, Vice Principal Barbara pretty much runs the school.

After a reboot, or whatever it is you do to unfreeze a robot, Max is summoned to Robot Integration Program HQ, formerly the school's auditorium before music and drama were done away with. Now the fun and excitement begin...

Read Fuzzy, by Tom Angleberger (of Origami Yoda fame) and Paul Dellinger. I recommend for about 3rd to 8th grade. 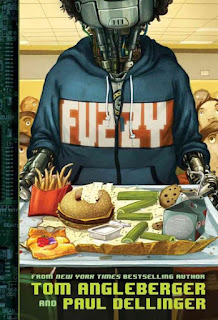 Posted by Holly, Youth Services Librarian at 10:40 AM No comments:

I am so happy to announce that we will be doing another weekend story time series! Join us Saturdays, September 17 through October 22 at 10:30 in the Puett Room for family story time! Bring the whole gang for stories, songs and super-duper silliness! Stay and play or participate in special activities after the program. 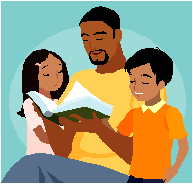 Posted by Holly, Youth Services Librarian at 10:16 AM No comments: 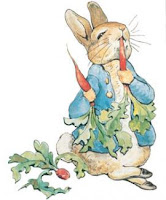 Terese Blanding of Billings, Montana will share the story of Beatrix Potter, the creator of The Tale of Peter Rabbit and other well-known books. Potter escaped the confines of a restrictive household in Victorian times to become one of England's most successful writers, naturalists, businesswomen, and sheep breeders.  Books, drawings, and other Potter memorabilia will be exhibited.  Come hear this fascinating lecture on Wednesday September 14th at 7-8 p.m. in the Burgess Community Room.

Join us on Tuesday September 13th at 6:30 p.m. in the Burgess Community Room as Cowboy Buck & Elizabeth put on a high-energy show that combines interactive musical comedy with dance, sing-alongs AND ventriloquism with Peter!  Their music and personalities will charm audiences of all ages!
Posted by Janet, Youth Services Librarian at 10:30 AM No comments: 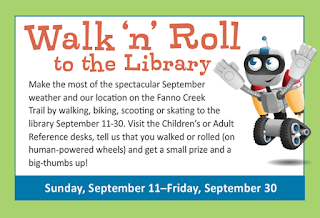 Do you walk, skate, or bike to the library?

Why not make the most of the spectacular September weather and our location along the Fanno Creek Trail by walking, biking, scooting, or skating to the library any time between Sunday September 11 through Friday September 30, 2016.

Stop by the Children's or Adult Reference desks to tell us that you walked or rolled on human powered wheels to get a small prize!!!

Posted by Janet, Youth Services Librarian at 10:30 AM No comments:

40 Years of Facts, Fiction AND Fun!

2016 marks the 40th anniversary of Washington County Cooperative Library Services throughout the county this fall. Get a passport at the Tigard Public Library and get it stamped at other WCCLS libraries to be entered into a countywide drawing for cool prizes.  The more libraries you visit, the better chances of winning.  Attend one of the Tigard Library's special 40th anniversary programs and pick up a passport there or at our Reference desks.  Attend one of these following events at the library to help celebrate 40 years with WCCLS!*


*All events will be held in the Burgess Community Room and will be open
to all ages unless specified.
Posted by Janet, Youth Services Librarian at 6:31 PM No comments:

Come visit the library during the annual Tigard Family Fest!  Have a rollicking good time with the whole family on Sunday September 11th, from 2 to 4 p.m.  First we'll have lots of fun with our favorite local kids comedian, Angel Ocasio! He'll make you laugh it up with his zany comedy show.  Then we'll have crafts and cupcakes to celebrate the City of Tigard's 55th and Washington County Cooperative Library System's 40th birthdays!  The Tigard Family Fest runs September 9th through 11th.
Visit www.tigard-or.gov/community/events.php to see the whole event lineup! 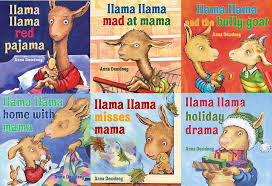 It is with a sad and heavy heart to announce that beloved author of the Llama Llama books, Anna Dewdney lost her fight to cancer over this past weekend.  Publisher's Weekly released the news on September 6, 2016 in this article.  The article/obituary requests that in lieu of having a funeral service, Anna would like for people to read to a child instead.

Posted by Janet, Youth Services Librarian at 12:55 PM No comments: