Rock (and Roll) the Night Away TONIGHT at the Library Sock Hop with DJ Scott Tom!

Calling all bobby soxers and daddy-o's! Dust off your poodle skirts and polish those saddle shoes. We're going to the Hop! Join us for a fun night of classic oldies and dance. Legendary DJ Scott Tom will help us rock the night.

Be there or be square!

Join us in the Burgess Community Room, Friday September 28 from 7-8:30 pm.

Posted by Janet, Youth Services Librarian at 3:54 PM No comments:

Our next LEGO Construction Zone will be held on Sunday September 23, from 1:30-3 p.m. in the Puett Room. Ages 5 and up are welcome to drop in to work on their own creations with other LEGO fans. We'll supply the building blocks; you bring your creativity! It's gonna be a ton of fun!!!

Also--stop by the childrens' room and take a look at the lego creations on display just outside the Puett Room!
Posted by Janet, Youth Services Librarian at 9:00 AM No comments: 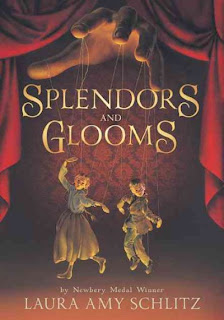 How do I even begin to describe this book? Like other books I've read and enjoyed, it has magic, grief and loss, suspense, creepiness, some pretty scary bad guys, and some nice kids just trying to get by. That's not new. But unlike any other book I've read, it combines all those things in a unique way while adding puppetry to the mix, and it becomes so much more. The ultimate creepiness for me is children being changed into little marionettes; they are completely paralyzed, and completely conscious, relying on others to give them movement. This is not a book for the faint of heart. Though the story is nothing like Harry Potter, for me it still brings that series to mind. If your child has read Harry Potter, then he or she is ready for Splendors and Glooms, by Newbery Medal Winner Laura Amy Schlitz.
Posted by Holly, Youth Services Librarian at 4:22 PM No comments:

Join us this Saturday for a celebration of classic folk tales. Come on time for a puppet and feltboard story time of favorites like the Three Bears, the Little Red Hen, and the Three Little Pigs, then stay to create your own puppets, toys, games, and books based on the characters. Take your creations home to tell these well known stories over and over.
Saturday September 15, 1:30-2:30 in the Puett Room!
Posted by Amber, Youth Services Librarian at 9:00 AM No comments: 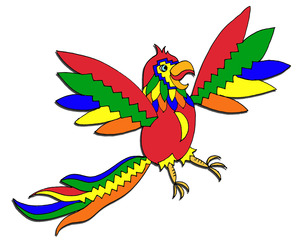 Join us for the next SUPER TUESDAY on September 11th at 7 p.m.  The Tears of Joy Puppet Theatre will be presenting Papagayo: A Tale from Central America, based on the book by Gerald McDermott.  This fun, interactive bilingual show brings the Guatamalan jungle to life.  The loud parrot Papagayo makes life difficult for the night animals, but his talents become useful when the Ancient Moon Dog wakes up and starts to cause trouble.  Join us as we sing, hoot, croak, crow, and team up to scare away the Moon Dog!  This show is perfect for ages 5 and up and will be held in the Burgess Community Room.
Posted by Janet, Youth Services Librarian at 9:00 AM No comments:

Eleven-year-old Sorano "Skye" Tsuki is American. Her dad is from Japan, but she definitely does not consider herself Japanese, or even Japanese American. In fact, she has never even met her father's side of the family. She has American friends, goes to an American school, and just found out she made it on the All-Star soccer team!

Eleven-year-old Hiroshi Tsuki is Japanese. He was born and raised in Japan and knows very little of his family in America other than that there was some sort of falling out. Following in his grandfather's footsteps, he is a kite-maker, and with his grandfather's assistance, he will soon compete in the annual Kite Fighting contest for the first time.

When Grandfather becomes ill and Hiroshi's father gets a new job, they move to Washington, D.C., and cousins Skye and Hiroshi are suddenly thrown together, much to each of their dismay. Now Hiroshi has lost his chance to compete in the Kite Fighting contest. Skye's parents have forced her to attend Japanese school so she can communicate with the family she has never known, and unless she can improve her performance, she will lose the opportunity to play for the All Stars.

They're not off to a very good start.

Any time a book makes me cry, I know it must be good. Flying the Dragon, by Natalie Dias Lorenzi, was good.

Posted by Holly, Youth Services Librarian at 9:00 AM 1 comment:

Do Not Feed the Bears!

Fall is in the air! Let's snuggle up with some beary nice friends and enjoy crafts, activity stations, bear games, honey treats and more.  All the bear necessities and supplies provided.

Posted by Terri, Senior Library Assistant at 5:05 PM No comments:


Recent research has been indicating that play is how kids learn and is important for their future success. This short article from the New York Times by Tara Parker-Pope, provides more explicit guidance around what types of games and how you can alter games to increase a child’s ability to pay attention, remember rules, and exhibit self-control—all strong predictors of academic success!

Here are a few things from the article that you can try with your kids or even a group of kids, for that matter:
• Play games like Simon Says, Red Light/Green Light, and clapping and signing games which require kids to pay attention and focus, follow instructions/rules/the leader, and exhibit self-control.

• Change rules or add new components to games develops mental flexibility and requires increased concentration and memory skills—examples include having kids touch the opposite body part than what is being sung during Head and Shoulders (touch your nose when you sing the word ‘toes’), switching green to stop and red to go in Red Light/Green Light.

• Do more singing and clapping games! Make up a new verse to an old favorite action rhyme that kids have memorized and try singing in the round (Row, Row, Row your boat is a good one to start with).

Publisher's Weekly has announced that Clifford the Big Red Dog will be turning 50 in February 2013.  Scholastic, the publisher of the books has been working on a whole bunch of plans to celebrate the golden anniversay.  Click here to find out more.
Posted by Janet, Youth Services Librarian at 9:30 AM No comments: